LinkedIn Rolls Out Roll Over Changes

LinkedIn has changed the appearance of the pop-up windows which appear when you hover your mouse pointer over the profile of another user of the professional networking platform.

This is another change to bring elements into line with LinkedIn's new styling, and like other changes it sees the component taking up more space on your screen, but unfortunately showing less information at the same time.

By chance, this change started appearing just after I'd run a training session for a client, so we can do a quick comparison here. Previously, the pop-up looked like this: 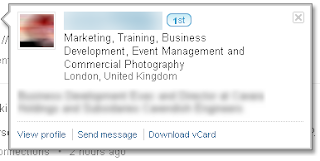 It showed your entire professional headline, which is the first thing that people see about you when they look at the popup. Now, it looks like this:

Although the headline is still there, it is truncated, so you should bear this in mind when wording it, to make sure that the truncation doesn't create anything unfortunate (a topic I've covered before). All is not lost, however, as hovering your mouse over the headline will result in a further bubble (or "tool tip") appearing, which contains the complete text. I've shown this in the example above.

My verdict on the change? Overall this shows less information that the previous version, so I'd say it's a bad move - the extra roll over option helps, but you do have to know it exists.